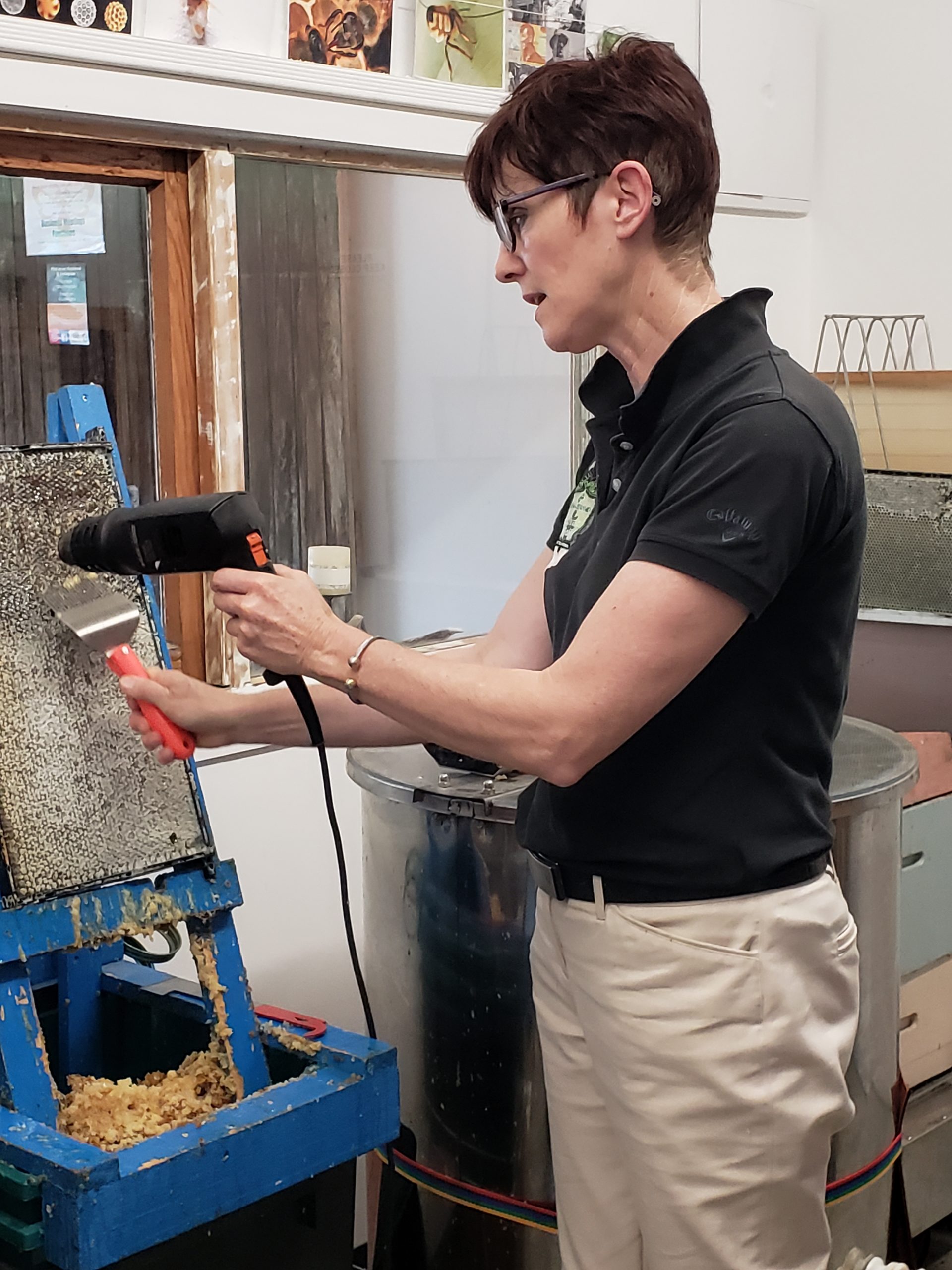 Did I mention that Kreig composed a daily agenda for us that includes a “Word of the Day”, what to wear, what to bring, and what meals will be provided? Today’s advice was “Wear whatever you think suits a movie, wine, lunch, beekeeping and a walk through a vegetable garden. I guess I’m saying dress comfortably (smiley face).” That about summed up our Friday!

Today’s word was tangata whenua which means “people of the land”. According to Kreig, though the Maori are not indigenous, they are considered to be this.

Our first quick stop was Mrs. Jones fruit stand (no popcorn allowed at an agricultural film!) The gardens there are incredible and, once again, I wished we had more time to wander around them. Also, to try their hokey pokey ice cream (honeycomb toffee chunks and vanilla), another NZ favorite.

Once in Arthur’s Cinema, a tiny, charming independent movie theatre in Cromwell run by this lovely couple, Anne and Laurie McAuley, I forgot about what I was missing. After telling us a bit about the picture we were about to see, A Seat at the Table, they let the film speak for itself. As will I.

What a treat it was, especially for those of us from the Finger Lakes Region in New York, to see how the winemaking industry has evolved in New Zealand. A remarkably similar experience to ours some cases. I will mention here that I have never been a huge fan of either Pinot Noir or Sauvignon Blanc but the ones we tasted have completely won me over. Not only is the film informative, it’s also unconventional and amusing and the type of documentary you could easily watch more than once.

It was fitting that our next stop was a boutique wine tasting at Brennan Wines. Located in the Gibbston sub-region of Central Otago, they grow and handpick primarily Pinot Noir grapes but are also known for “pushing the boundaries of winemaking”. It was there that I tasted a Pinot unlike anything I have ever experienced before. Modestly called “B2” it was phenomenal in that I could actually smell its bouquet-individual scents and aromas-a talent that has eluded me for years. And the wine tasted every bit as heavenly as it smelled!

From there we moved on to Buzzstop Bee and Honey Experience where we put on bee suits (no photos of that!) and got to practice being beekeepers with Nick and Rosie. Here we learned about spinning and bottling honey and the bees’ critical role as pollinators in our ecosystem

Fun Fact: The most famous beekeeper in New Zealand was Sir Edmund Hillary. Apparently, a man of many diverse talents!

The final stop of the day was a return to Sherwood, where we took a tour, led by Bruce, the head gardener of the restaurant, to hear more about Sherwood’s philosophy of stewardship and sustainability.

Our last day in New Zealand was February 29-Leap Year.  It was billed as a slow day-all we had on our agenda was jetboating and a farewell dinner. After a relaxing breakfast, we boarded the van and drove along Lake Waktipu to Glenorchy, home of the Dart River Jetboat. There they had a nice tribute to (Sir) Bill Hamilton, inventor of the Hamilton Jet and an inductee into the New Zealand Sports Hall of Fame. Remember him from the Maritime Museum? He was the man who dreamed of designing a boat that could carry him up and down the shallow, swift rivers of his homeland. So, in 1954, he did! See why I like New Zealanders?

Dart River is a two-part adventure. First, we boarded a large, crowded bus and rode to the river where we were taken on a hot and buggy walk in the woods. Honestly, that part was pretty boring, though I did meet some interesting people and take a few photos.

Back on the bus, we started down the river to where the boats were docked. As we crossed a small creek the bus got stuck in the mud, began to sink, and we were forced to rapidly evacuate it. That provided much merriment, shouted, unsolicited advice to the driver, and dozens more photo opportunities. Quite the debacle!

The jetboating itself was exhilarating-the perfect end to our trip which had begun seven days ago with a high-energy yachting adventure. Whizzing around the glacier-fed, braided river at 55 mph, dodging boulders, logs, and other unexpected obstacles is like being on an endlessly-thrilling amusement park ride. Especially when our fearless driver Jimmy spun us in 360 degree turns! I was having too much fun to take pictures so you’ll have to make do with this clip.

Oh, and the surrounding landscape was breathtaking-as usual

That night we got dressed up and went to Kreig’s favorite restaurant, Blue Kanu, a loud, funky tiki house where Polynesian/Asian food is made with “flavors that will float your boat” and served with chopsticks (or silverware for the less brave). Foregoing a tropical drink, I tried another type of New Zealand Pinot Noir-quite pleasing to my palate. Kreig made a small speech and presented Patricia (left), Pat, and Curt with gifts for being frequent and enthusiastic Classic Journeys travelers.

On the walk back home, we all enjoyed some people watching as we shared a last small glass of cherry port (from Mrs. Jones fruit stand of course) together on the waterfront. It was a bittersweet feeling to say goodbye. Trips like this always remind me of summer camp-so much intense time spent together, shared memories and revealing conversations with people you may never see again.

One thing is for sure though, I’ll never forget any of my fellow travelers or the time I spent getting to know and appreciate New Zealand!

Kia ora til our next trip together…