Towering 1,045 feet above the city, at night the Roanoke Star can be seen from sixty miles away, a welcoming beacon to us road-weary travelers. Early the next morning we headed over to Mill Mountain to check out this symbol of Roanoke’s progressive spirit. Coincidentally it was the Star’s birthday-having been first illuminated on November 23, 1949! Apparently, it holds the record as the world’s largest man-made star. Once you’re done taking pictures there are a bunch of hiking trails to explore, a small zoo, and a Discovery Center for kids. 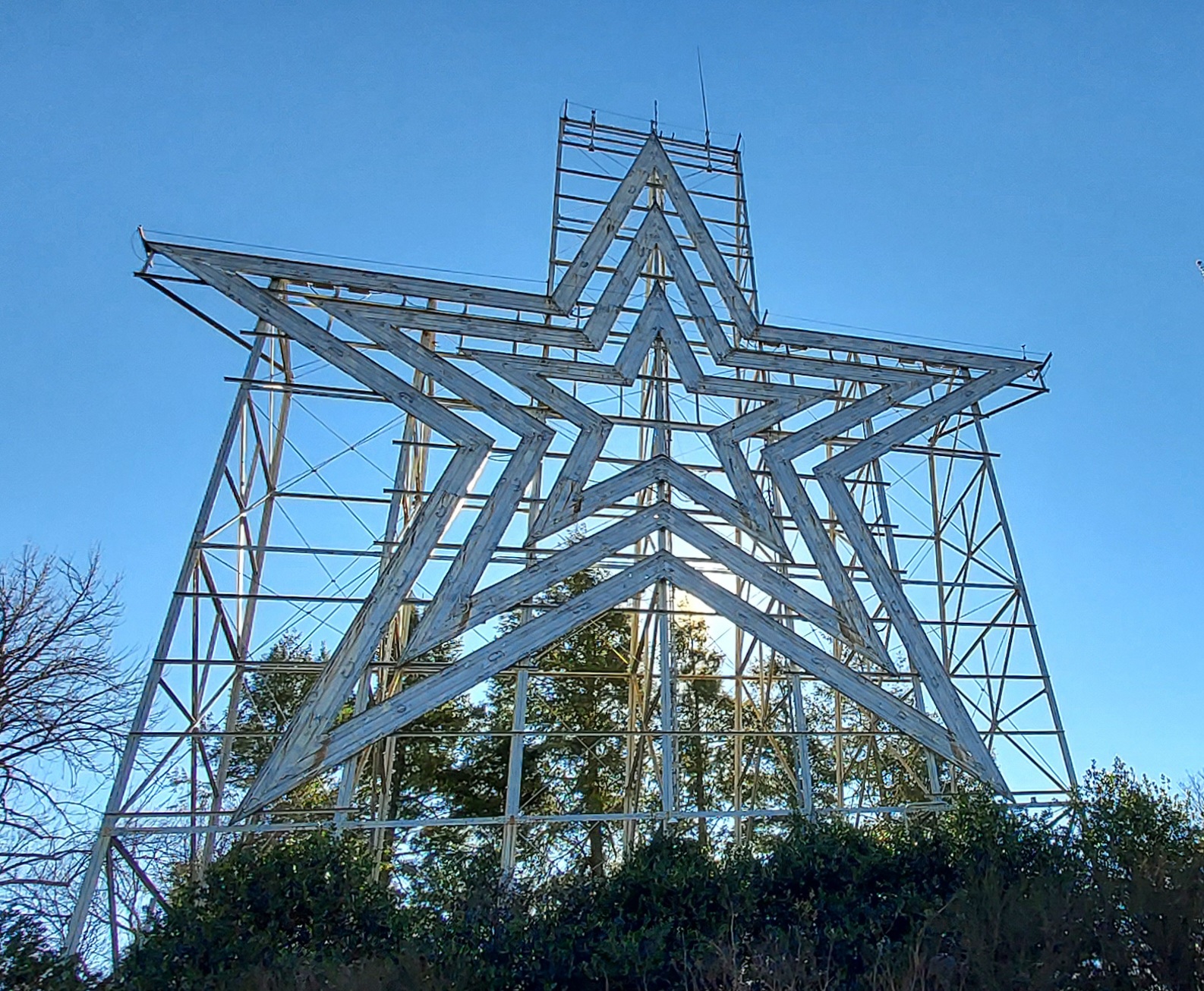 What I liked most was the meandering walk through the Wildflower Garden. Overflowing with native shrubs, trees, and flowers (now dormant) that I’d love to see in bloom next spring, it also has and a charming water feature. Take a look at these fairy houses!

I can’t remember how I found Andrew Reams, DieselDucy, and ElevaTOURS. Probably through a Google search of what to do in Roanoke. Regardless, I was instantly captivated. Andrew is an elevator enthusiast. You beard that right! He collects and displays elevator parts, along with creating YouTube videos of elevators everywhere he goes.

Before you click off or start laughing too hard to read further, consider this. Since 1993 when he began filming these iconic modes of transportation, Andrew says he’s amassed millions of followers in his “elevated, uplifting” (and global) community. Within 24-hours of posting a new video, it can get over 500 views, enough that YouTube now pays him for advertising on his site. Which in turn allows him to travel further and create better videos, a win-win for everyone involved.

Here’s one of his videos that tells a little more about who he is and what he does.

As a child, Andrew was diagnosed as being on the autism spectrum. People with Asperger’s and Autism have fixations he says, which can include fire alarms, toilets, trains, and yes-elevators. Noting there could be a lot worse obsessions than this, he’s proud he’s managed to turn what some might call an odd quirk into a profitable passion as well as a parental resource for those who have children on the spectrum. He can’t count how many families have told him how much DieselDucy, the YouTube clips, and the museum itself means to them and their son or daughter. Meeting someone who hadn’t, despite occasional ridicule, been discouraged from realizing his dream was inspiring and Andrew was a delight, his enthusiasm contagious. But he’s aware his idea of a museum may be different than the more traditional definition so the tour is not for everyone. That’s why it’s free, and people can spend five minutes or several hours there; it’s all the same to him.

The collection is wide and varied, containing an abundance of mechanical objects dedicated to preserving the history of elevators. Housed in a storage facility, visits are by appointment only. Andrew met us at the door of a loading dock and we took (what else?) an elevator up to where his collection resides. There are two rooms, one neatly arranged and the other overflowing with things he still has to catalogue and display-he still works fulltime. I wouldn’t call what he offers a tour as much as a chance to browse through various pieces and parts of elevators and to question the man who may possibly know more about them than anyone else on this planet. 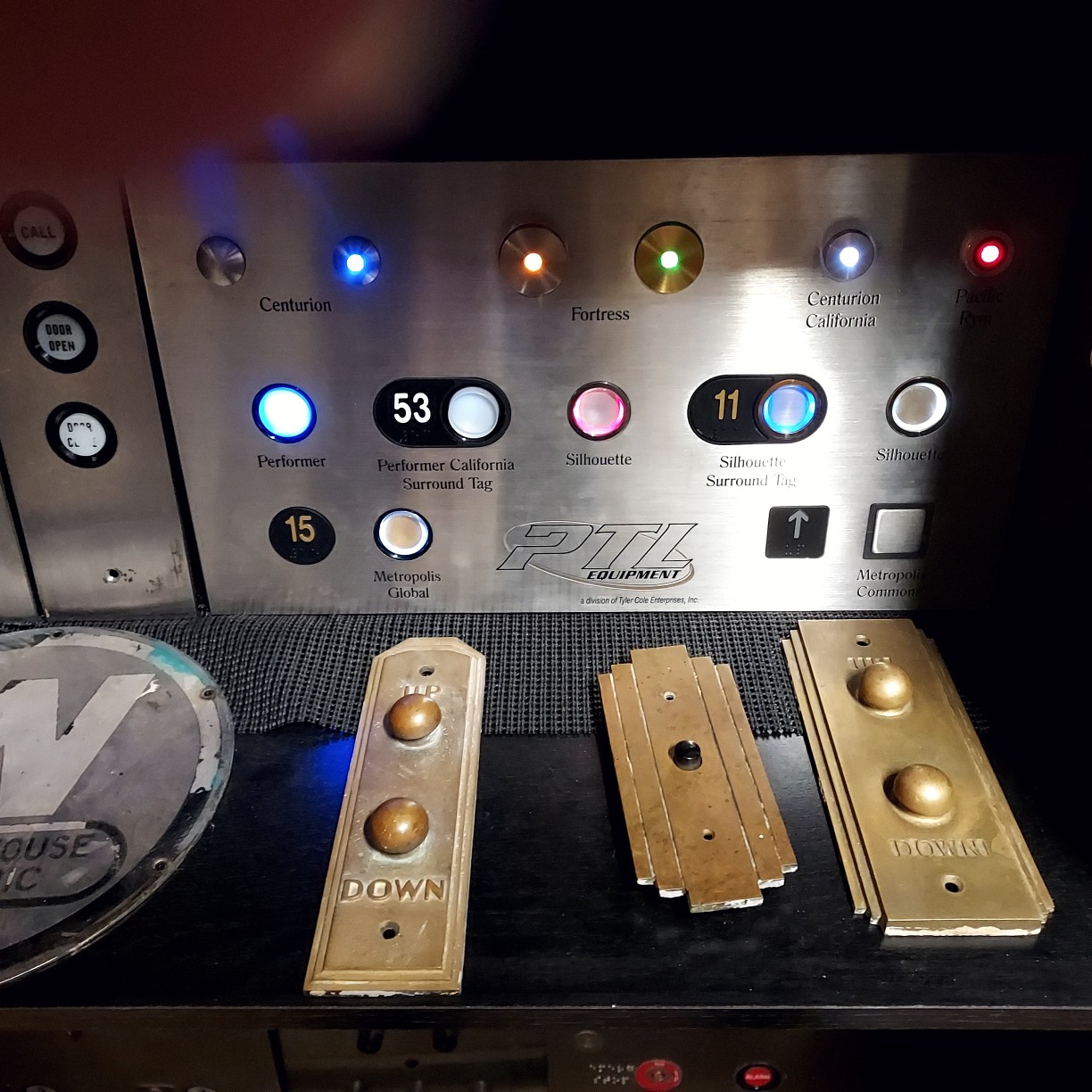 My husband and son focused on how various mechanical parts worked; I was more interested in learning if you could really be trapped on an elevator and for how long, can elevator doors open between floors, what’s the highest number of floors he’s ever seen on an elevator button panel, and if businesses actually do avoid putting an unlucky thirteenth floor on their elevators. We spent over an hour there and what I liked most was having the chance to zero in on one mode of transportation and the time to explore it in-depth, rather than simply glancing at an exhibit and breezing on to the next one.

When asked if there was piece of memorabilia, he’d really like to get ahold of, he revealed he’s currently working on a major acquisition so stay tuned! Wishing him luck and a Happy Thanksgiving, we said our goodbyes. To schedule a visit yourself or learn more go to https://www.dieselducy.com/elevator-museum.html

Rest assured you’ll never look at an elevator in quite the same way again!

Tagged with: Roanoke | Travel tips | US attractions | US museums | Virginia