Back to the Future: Returning to Seneca Falls for Inspiration

I drove to Seneca Falls last weekend to participate in the Women’s March there. It was a symbolic choice of marching venues; as board member of Friends of Women’s Rights National Park, Marilyn Tedeschi, said “All roads lead to Seneca Falls.” And it’s true. When I think of Seneca Falls I think of the courageous and committed women who met there, not only to talk about the changes they hoped to see in America, but to agree on the action steps that would make their wishes become a reality.

When I walked down Fall Street on that sunny Saturday, I didn’t have a sign or an agenda. I attended the March because that whole week I had found myself at loss for words (a very rare circumstance!) and I was having trouble organizing my thoughts on the page. I wanted to hear what the thousands of people of all ages, sexes, colors, and religions, people who cared enough to dedicate a Saturday to uniting for a common purpose, had to say. I was hoping that their words would inspire and motivate me.

What most impressed me about the event was the lack of negativity. What happened in Seneca Falls that day wasn’t a protest; it was what democracy looks like. There was no need to marginalize or degrade anyone-it was time to “Lace up your boots! March forward!” as one woman’s sign proclaimed.

The speakers acknowledged that for many of them it had been a difficult time, filled with fear, despair, anguish, hopelessness, and even shame. I have felt many of these feelings myself and they can be immobilizing. When Dr. Betty Bayer, professor at Hobart and William Smith Colleges in Geneva, stood to read a poem written by conservationist and activist, Terry Tempest Williams the morning after the 2016 election, I felt less alone. Tempest Williams described how she was a “writer without words-struggling to find them” and that she felt like she and the environment were suddenly vulnerable in ways they hadn’t been before. But then she writes of shaping this despair into some form of action and “moving forward like water in all forms” and reminds us that water is strong enough to break stone. But it was her conclusion that restored my natural optimism. Her words, “We need to be brave enough to feel it deeply and then act” reminded me that we have all been through tough times before and survived them, both as individuals and as part of a community.

Tempting as it might be some days, you can’t throw up your hands and abandon your country when things aren’t going the way you wanted. Syracuse Mayor Stephanie Miner looked back at the women who came to Seneca Falls. She spoke of how they took the ideas and words of our democracy and used them to achieve their goals-to gain equal rights for women and people of all colors. She added, “The real history is made by people who get up and stand up for their values.”

Long-time women’s studies professor Dr. Sally Roesch Wagner put it more bluntly. “…Understand that there can be no bystanders,” she said. “Either we will shape our future or our future will be shaped for us.”

Mary Simpson Smart of Lyons, NY was there as well. She recalled riding in a celebration parade with her mother at age five in 1920 when, after years of hard work, women finally gained the right to vote in the United States. Mary is now 101 so she has certainly put in her time! Yet she cared enough to come to Seneca Falls and tell all who assembled there, “You must carry on. You’re doing the right thing.” 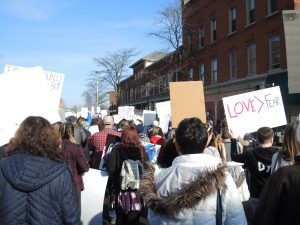