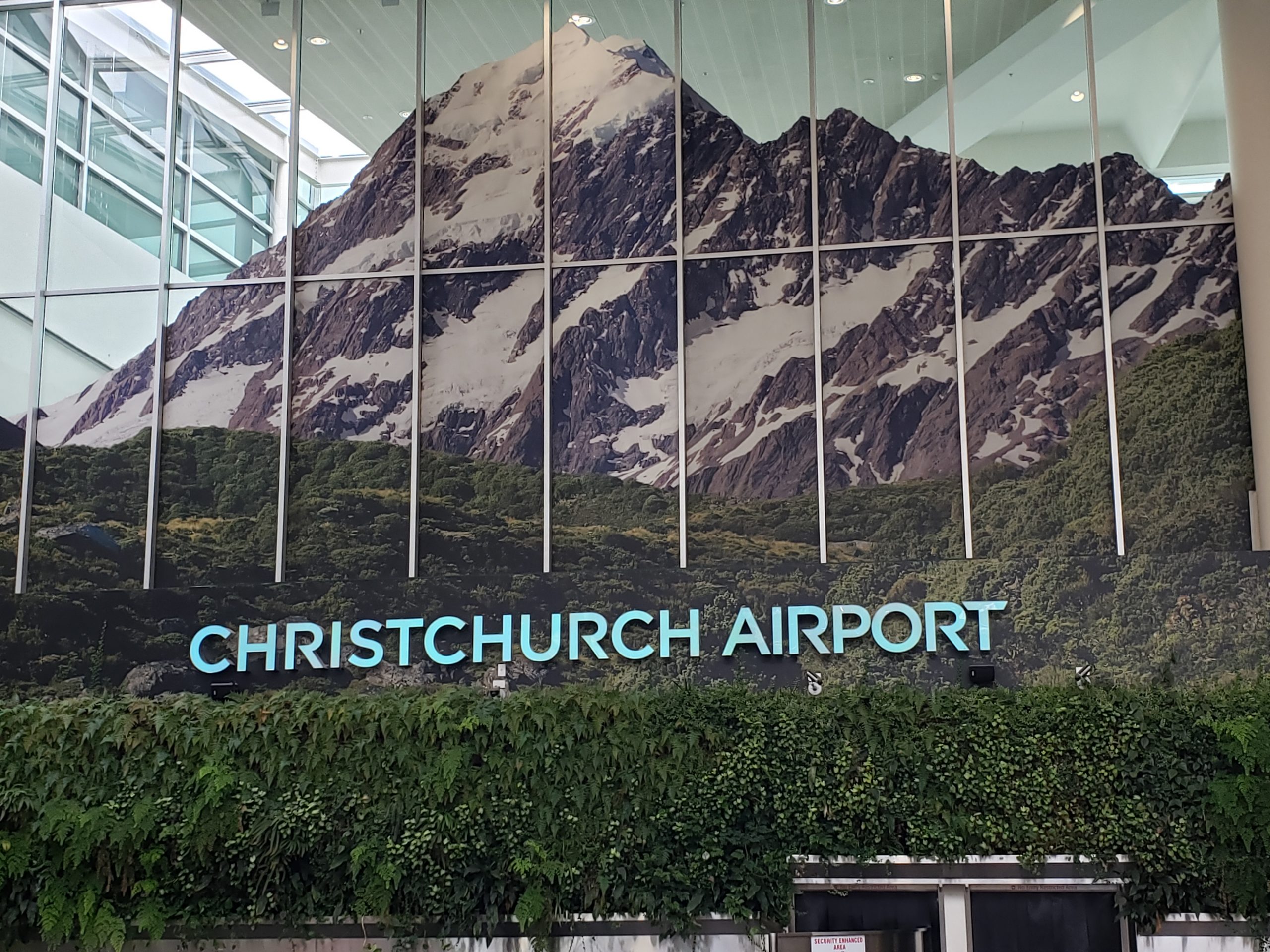 After a short domestic flight from Auckland to Christchurch in the South Island, we picked up our van, loaded our luggage in, and headed south.

As we drove, Kreig entertained us with facts and bits of local lore. For example, one of his hobbies is learning the words to other country’s national anthems!

We made several stops, to eat, sightsee, and stretch our legs. The first one was the New World grocery where Kreig purchased some local snacks and water.

I always feel like no trip is complete until you see where regular people do their shopping. We followed our guide into the supermarket where we bought some New Zealand wines and a packet of Griffens Biscuits-Original Toffee Pops-which the cashier assured me were her very favorite (so I left her one on a napkin for her next break!). New Zealander John Griffen founded his “bikkie delight” company in 1890 and continued baking through two company fires and two World Wars. Now that is dedication to your craft! We all agreed that the cookies were quite tasty, as were the Pineapple lumps (Kiwiana) a favorite chocolate-covered sweet with an extremely chewy pineapple flavored middle. The last batch of lumps was recently made in NZ but they are still a Kiwi favorite!

In a Christchurch suburban park we wandered through an extremely moving photo and narrative exhibit of how the earthquakes there had impacted people’s homes, businesses, and lives. I was reminded of the difference between reading about a natural disaster that happens halfway across the world and actually seeing the damage for yourself. The city is rebuilding but still has a way to go, both in terms of physical repairs and morale.

We also disembarked at the implausibly-blue Lake Tekapo,
one of the few settlements in the sparsely-populated (369 residents in the 2013
Census!) Mackenzie Basin and home to the charming Anglican Church of the Good
Shephard, built to commemorate the early settlers. The lake is popular for
recreational boating and swimming in the summer so this would definitely be a
full day stop on a return trip to NZ.

The van arrived at our next hotel, the Hermitage, late that afternoon. The room was warm but there was a fan and a small balcony to sit on and admire the stunning view of Mount Cook (Aoraki is its Maori name). The highest mountain in New Zealand, it stands 12, 218 feet and is where Sir Edmund Hillary perfected his climbing skills in preparation for his conquest of Mount Everest.

The Hermitage is the most high-end hotel in the area (as with many national parks, there aren’t a ton of options to choose from) but its worth a night’s splurge, for the panoramic views at sunrise and sunset, to see the stars on a clear night, and the wide variety of hot and fresh foods offered at the Alpine Restaurant’s buffet meal. Except for the vistas, the rooms weren’t particularly inspiring, and the words I would use to describe the staff’s attention to their guests needs could include lackluster, languid, and lethargic.

However, the Hermitage is accessible to all the park has to offer, including lakes, rivers, glaciers, and mountains. The Mt. Cook area is made for those who crave physical activity and adventures so, if that describes you, definitely reserve accommodations ahead of time and budget yourself a few days to spend there!

Fun fact: Hiking is called tramping in New Zealand, which means “walking over rough country” and being prepared for anything that might come your way! Tramps can last anywhere from a few hours to a few days.