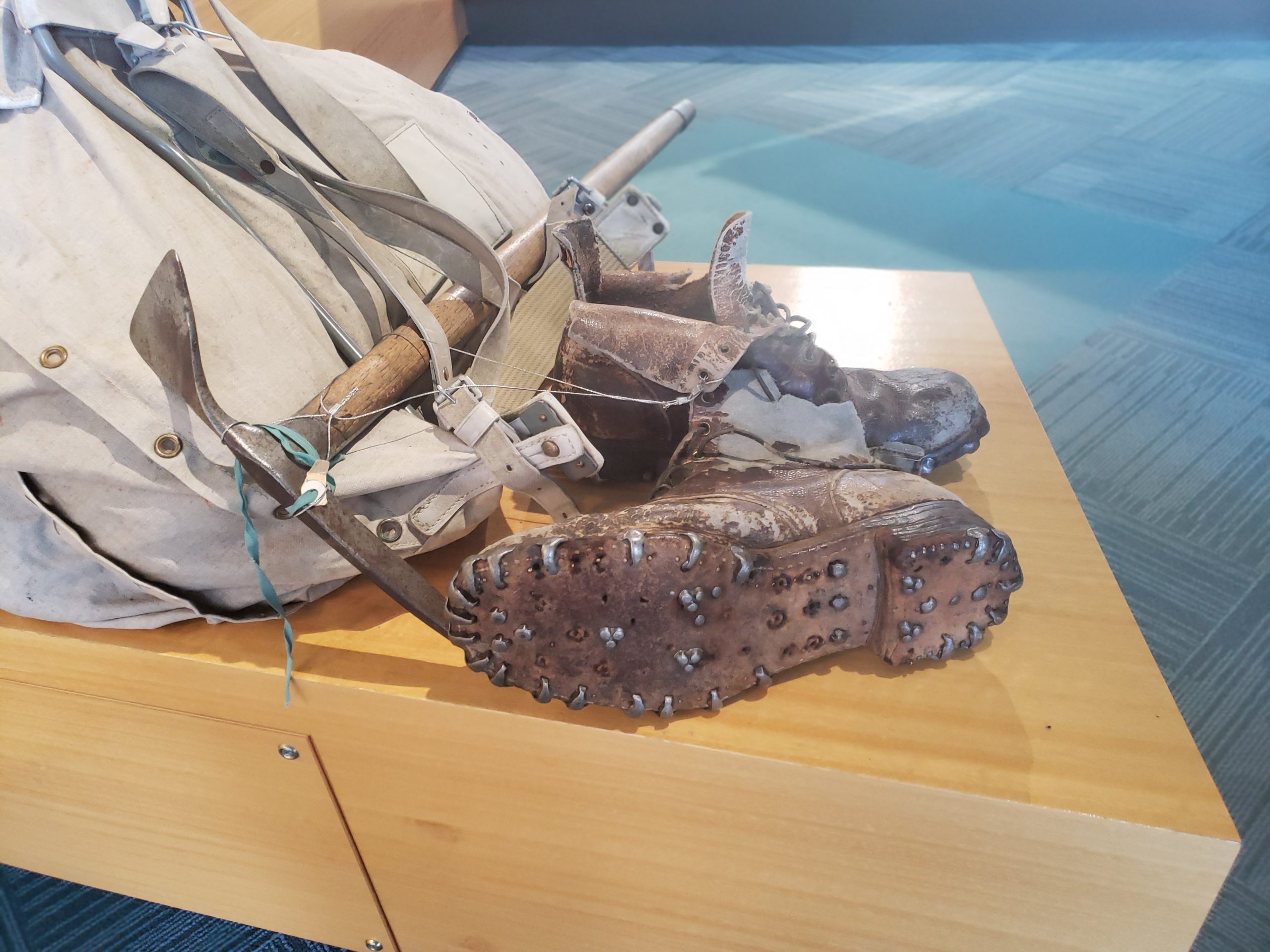 This will be a longer-than-usual post as it was a busy day and I haven’t blogged in over a week!

First stop this morning was the Sir Edmund Hillary Visitor Center-a handy two-minute walk from the hotel lobby. Though we had a full day ahead of us, Judie and I wanted to check it out (in case Kreig had forgotten to mention any details-not likely!). It turned out to be a short, but very worthwhile stop. As with many things in New Zealand, I’ll look forward to returning and dedicating a few hours to it.

One of the things I found most interesting about the museum was how it spoke to the relationship between humans and their landscape, in this case, men, women, and mountains. In fact, one of my favorite signs highlighted the difference between objective and subjective dangers. Objective dangers have to do with the mountains themselves and are something that we have no control over, like severe weather or landslides. Our job is to learn all we can about these and develop the judgement to interpret the signs and conditions of the mountain so as to limit the danger to ourselves and others.

Subjective dangers are entirely within the climber’s control and can be minimized or prevented by training, equipment and, most of all, what mental and physical resources the mountaineer arrives at the base of the mountain with. Perhaps most importantly, the person wishing to ascend the summit must know when to push on and test the limits of their endurance and when to turn back.

But even with a full grasp of all types of danger, failure of judgment can occur and not everything can be prevented. That’s what gives mountain climbing its edge and why so many, like Sir Edmund, find it an addictive pursuit.

Check out these serious climbing implements!

One thing that I have found really appealing about the Kiwis I have met so far is their ability to tune into the land and natural elements around them. This attentiveness, and having a deep respect for the natural world, is something that I feel a lot of Americans (including myself at times) have distanced themselves from being comfortable with and I would love to see us all reclaim it.

On a “writerly” note, I really liked this excerpt about love and mountains:

The visitor center was a fantastic preview for the rest of the day and I was looking forward to our next activity, the Hooker Valley Track. Though it is regarded as the best hike for accessibility and views, our tramp did not go quite as I’d imagined! The hike was about 10 miles round trip, which was no problem. What I did not like was the speed we were forced to travel at because of a scheduled afternoon boat ride. The brisk pace was fine in the beginning and the three suspension bridges we crossed were exhilarating, as we swayed high above the rugged landscape a very long way below us. The views were picture-perfect and Kreig had told us that he has a tradition of taking a dip in the Hooker glacial lake which I, as an avid cold water swimmer, was interested in trying that as well.

Since I had worn my bathing suit under my hiking clothes, my backpack with the hotel lunch was heavy, and the temperature was rapidly rising, I was looking forward to a nice, cool dip. I’ll admit I had second thoughts though when I saw that there wasn’t a real beach to wade into, there were chunks of ice floating in the lake, and the water wasn’t the clear blue I’d envisioned, but rather that milky, silty white color that I didn’t find quite as appealing.

However…I had said I’d do it so into the lake I went. There I discovered that glacial was not a descriptive enough adjective-it was immobilizing, frigid, and heart-stopping. I made it up to my neck, immersed myself underwater briefly and paddled and stumbled my way back to shore. Once there, I decided it really wasn’t so bad and that was my biggest mistake yet. As I started back in to try another dunking, I tripped and impaled myself on a rock. I knew I should have quit while I was ahead!

Luckily my injury was something our first responder guide could easily fix with his handy first aid kit. We started back down the trail at an even more rapid clip but were soon forced to stop and use the most horrible outdoor bathroom I have ever experienced. Like being in a smelly pressure cooker!

By the time we got back to the hotel we were ready for a nap, but instead we set off for our Glacier Explorer adventure. We hiked to the boats, put on our life jackets and set off. This was actually a super-cool (no pun intended!) outing. We had some wonderful views of the glacier from the water, got to hold a large chunk of glacial ice (the glacier had been “calving” all morning), and, best of all, were able to see a giant, fresh iceberg roll over several times. It might not sound that interesting but believe me when I say it’s one of those things that you have to see in real-life to appreciate it. Sort of like the Grand Canyon or a whale breaching!

After congratulating myself for logging 26,000-plus steps on my Samsung Health app, I met Judie for a glass of Sauvignon Blanc, followed by dinner at the hotel’s Panorama restaurant. There we all enjoyed some good food, a few more glasses of wine and a lot of laughs over the day’s events.

We had been hoping to stargaze that night as Mt. Cook is part of the Aoraki Mackenzie Dark Sky Reserve but honestly? Everyone was too tired. Looking at the skies with absolutely no interference from light pollution will have to wait for my return trip to New Zealand.