Our group’s first stop once we’d cleared Customs, was the Plaza de la Revolucion, a square that has been the site for many political rallies and revolutions that have altered the course of Cuban history. This was also our first introduction to Jose Marti, one of Cuba’s greatest heroes, whose name we would hear on a daily basis. Marti, a patriot and martyr, became the symbol of Cuba’s struggle for independence from Spain. He was also a renowned poet, essayist, and journalist. Many Cuban’s continue to speak reverently of him, his thoughts, and his actions today. 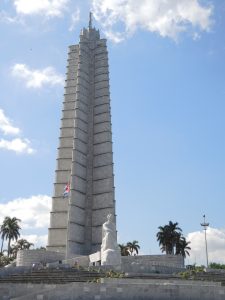 I then had a welcome mojito (a refreshing custom we became accustomed to during out stay) at the elegant and stately Hotel Nacional bar, covered with pictures of all the famous people who had visited there during each era of the twentieth century. It was a fascinating glimpse into what types of men and women had been drawn to Cuba over the years. We then adjourned to the patio where a delicious family-style lunch that included braised chicken, shredded beef, and rice and beans was served. These were all dishes we would become intimately acquainted with over the next seven days! It also turned out to be a good thing that we went to the Hotel Nacional in the beginning of our trip because the hotel was placed on President Trump’s November 7th, “Cuba Restricted List”, due to the alleged “sonic attacks” that were said to have occurred there. 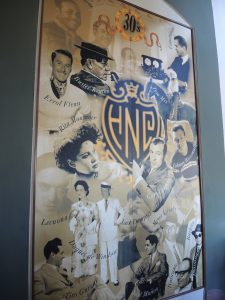 Next up was the Revolutionary Museum, housed in the Presidential Palace. Unfortunately we didn’t get to spend as much time browsing through this as I would have liked but a few things stood out for me. First of all the intense pride many Cubans have for their leaders was obvious in the wording of the displays (mostly in Spanish and English). Additionally, it was clear that a lot of Cuban men and women too (not just Fidel and Raul Castro and Che Guevara) felt that risking their lives, suffering numerous hardships, and overcoming all sorts of obstacles were all worth it if they could achieve independence for Cuba. 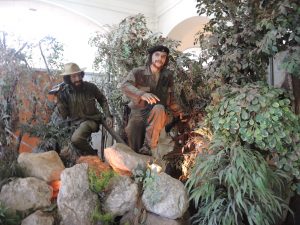 It was in the museum that I first began to realize that my limited perception of Cuban history-absorbed through snippets of conversations or radio news as a child in the 1960’s-that Fidel Castro was a charismatic communistic (and thus a “bad guy”) who believed in group, rather than individual, identity and that Cubans were like sheep, blindly following his lead, might not be completely correct.

As in America, several groups of schoolchildren were being marched through the museum and we got our first introduction to the colored clothing system Cuba uses for education. The elementary school children were adorable in their white shirts with bright red scarves tied jauntily around their necks. The middle school boys and girls all wore goldenrod pants and skirts. The only ones missing were the high schoolers, clad in navy and white, but we saw groups of them from the bus windows later that day.

That night, following an interesting lecture on the differences and similarities between Cuban and American culture, we dined on the Vedado rooftop in our first paladar (a privately owned restaurant) Café Laurent. We were given a choice between several entrees and the food was fine, but definitely not the gastronomic experience I had expected from what was reputed to be one of Havana’s best restaurants. Not only that, but the service was so speedy that they whisked my plate away before I was done with my meal! I began to suspect that, coming to Cuba as part of a group tour, the experiences would be more important than the food.