I recently returned from a week-long People-to-People trip to Cuba through Cornell’s Adult University. True confession-I have not ventured outside of North America since 1991! The other novel part of the trip was that, prior to Cuba, I had never taken an organized group trip and wasn’t sure how I felt about giving up my independence. The trip was amazing! 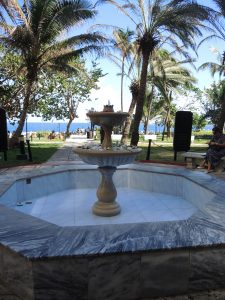 In this case, for me, group travel was the way to go. The majority of the group members (from all over the US and Mexico) were seasoned abroad travelers and more than willing to share their ideas and suggestions about international travel. They also had great questions for everyone we encountered. It was somewhat similar to being at summer camp. You arrive not knowing what to expect or if you’ll bond with the people you’ll be living with for a seven days but, at the end of a week of shared memories and experiences. a feeling of solidarity has developed between everyone there. Many times during the week we were told “Cuba is complicated,” three words that became a mantra of sorts for our group when things didn’t make sense or go according to plan.

My experience in packing for camping trips turned out to be helpful in traveling outside of the country. I managed to arrive with just the right amount of clothing and shoes, plus my travel journal, notebook, and pens, and some leftover Halloween candy in case I got homesick. I also brought a small pharmacy along (eye drops, ibuprofen, and cold medicine) just in case. This turned out to be smart as there are two pharmacies in Havana-the no-cost Cuban one for locals and a miniscule (and not free) American one. Things I would bring next time include a wristwatch, a small flashlight, and Duct Tape

Expect that the accommodations in a different country may not be the same as what you’d find in a comparable hotel in America. The hotel rooms were minimalist. There were no coffee makers, pads and pens, Kleenex, or clock radios, though there was a television. For a day or two there was no hot water in some rooms and no water at all in others. My first room had a strong odor of mildew or mold and a bathroom light that flickered in an alarming manner until staff changed it for me.

Tipping maids was another adjustment. I’ve always tipped the maid at the end of my stay. When I saw a little card with her name on it placed next to my bath towel which she had folded in the shape of a swan the first day, I was charmed and wrote “Muchas gracias!” on the card. Talking to our group’s resident expert on tipping, it turned out that I should have left money, not a cheery note! This gaffe caused a wave of hilarity amongst my fellow travelers. After that I left money daily.

Speaking of money, Cuba doesn’t accept American credit cards so the trip was cash-only, which we changed into CUC’s (convertible pesos) when we arrived. This forced us to budget more carefully than if we had just been able to whip out that little piece of plastic. Another noticeable difference between our countries is the lack of reliable Internet service. Cubans are making the transition from analogic to digital and, though you’ll see some Cubans on cell phones or, more rarely, laptops, you’re just as likely to see them talking on corded phones in phone booths (remember those?).

Astonishingly, bathrooms turned out to be of crucial importance on the island. In Cuba you are expected to throw all your toilet paper in an adjacent trash can rather than flushing it. You always need to think ahead and bring a pack of Kleenex with you because the bathrooms you visit during the day on the road may not have any paper (or toilet seats!). In other words-be prepared for anything!

Our trip was designed to pack as many diverse experiences and as much information about Cuba and the people who live there as possible into a week and the organizers did a fantastic job of this. I had been concerned that this breakneck pace would leave little time for exploring or meeting people on my own or spending extra time in places that intrigued me, like the bookstore in Matanzas. I was right about this, but it found that the trade-off between getting a quick glimpse of all the country had to offer from people who actually lived and worked there was more beneficial than me trying to navigate around myself with my inadequate high school Spanish and no idea what I was doing. If/when I am able to return to Cuba now at least I’ll have a good idea of what I’d like to see and do.

Next up-what we saw and did.