As more and more in-person events reappear in Seneca County, I decided it was time to post about summertime in Seneca Falls. Convention Days, held the weekend of July 15-17.

My friend Heidi (Hyannis last summer!) was the perfect companion for a busy Saturday in the historical village. I had a great time planning an afternoon chock full of women’s rights themed activities.

First stop was the 2022 office of a working woman in Seneca Falls! Heidi had never seen my workspace, the place where I write, blog, edit, revise, and create, before and was suitably impressed. She especially admired my Alice Gant (Trumansburg, NY fabric artist) historical banner featuring the original women’s rights activists mobilizing to change their world.

Next up was a talk at Wesleyan Chapel by Janell Hobson, PhD. An Associate Professor of Women’s, Gender, and Sexuality Studies at the University at Albany, State University of New York where she teaches diverse courses on intersections of race, class, gender, media, popular culture, and feminist theory. Janell has devoted her research, teaching, and service to multiracial and transnational feminist issues in the discipline with a focus on representations and histories of women in the African Diaspora.

There’s a new movie coming out in September featuring Viola Davis (The Help, How to Get Away with Murder) called The Woman King. Janell has found the conversations that are occurring around the historical epic, based on a two-minute trailer of it which you can watch here- https://www.youtube.com/watch?v=3RDaPV_rJ1Y  , fascinating, and not always in a good way. For example, some people are criticizing its title, saying that calling it The Woman King “denies women’s rightful role as Queen”. Others are focusing on the fact that the Dahomey (western Africa) were part of the Atlantic Slave Trade themselves, rather than tuning in to the broader message the movie is imparting. Regardless, Janell herself is a big proponent of portraying women as “buff and fighting back”, an observation that drew chuckles from the female audience. She also spoke about slavery as an economic-based, systemic and dehumanizing practice in America, adding that defeminization is not talked about nearly as much as demasculinization.

After the talk concluded we strolled over to Café 19 for a late lunch. Named for the Nineteenth Amendment, which granted women the right to vote, and decorated with murals of the famous suffragettes, this is one of my favorite local spots to grab a bite at. The ambiance is inspiring and the soups, sandwiches, salads are always perfectly prepared and taste great. There are all sorts of flavored ice teas too, perfect for the toasty temperatures outside. I was content with my peachy tea and Heidi loved her raspberry drink.

Lunch was followed by more exercise, thankfully not ours except for the walk over to Elizabeth Cady Stanton’s home on Washington Street. After being greeted by a ranger (Seneca Falls is one of the only National Park sites in the area) we wandered into the back yard in to watch an old-fashioned game of baseball. This was quite interesting as I’d not realized women had their own baseball teams as early as the 1800’s, either thru their colleges or hometowns. There was a team of each of these in this match and we empathized with them having to bat and run in the heat. Though it seemed to bother us more than the players! The pitcher was so good, at one point it was suggested that she might be a (gasp!) ringer but, as far as everyone else was concerned, the only ringer was the player who rang a small gold bell every time a run was scored. Several carefully screened twenty-first century players (read the boy’s t-shirt!) also joined in the game, making it a real community event.

Our final stop was the Women’s Rights National Park which I’d been to many times, but Heidi had never seen before. We browsed through the exhibits reading about how women have struggled and fought to gain equal rights in education, employment, and politics-just to name a few arenas. We agreed that it’s amazing how far we’ve come but that there are still plenty of obstacles to overcome and more inroads to make. To remind ourselves of this on a regular basis we bought matching t-shirts in the gift store!

I found Convention Days to be reassuring and reaffirming, especially given recent national events. It was a timely reminder that, for hundreds of years, women have excelled at goal setting, multitasking, hard work, and persevering. That’s one thing that hasn’t changed and, despite some unsettling setbacks, will continue to be what moves us steadily forward. 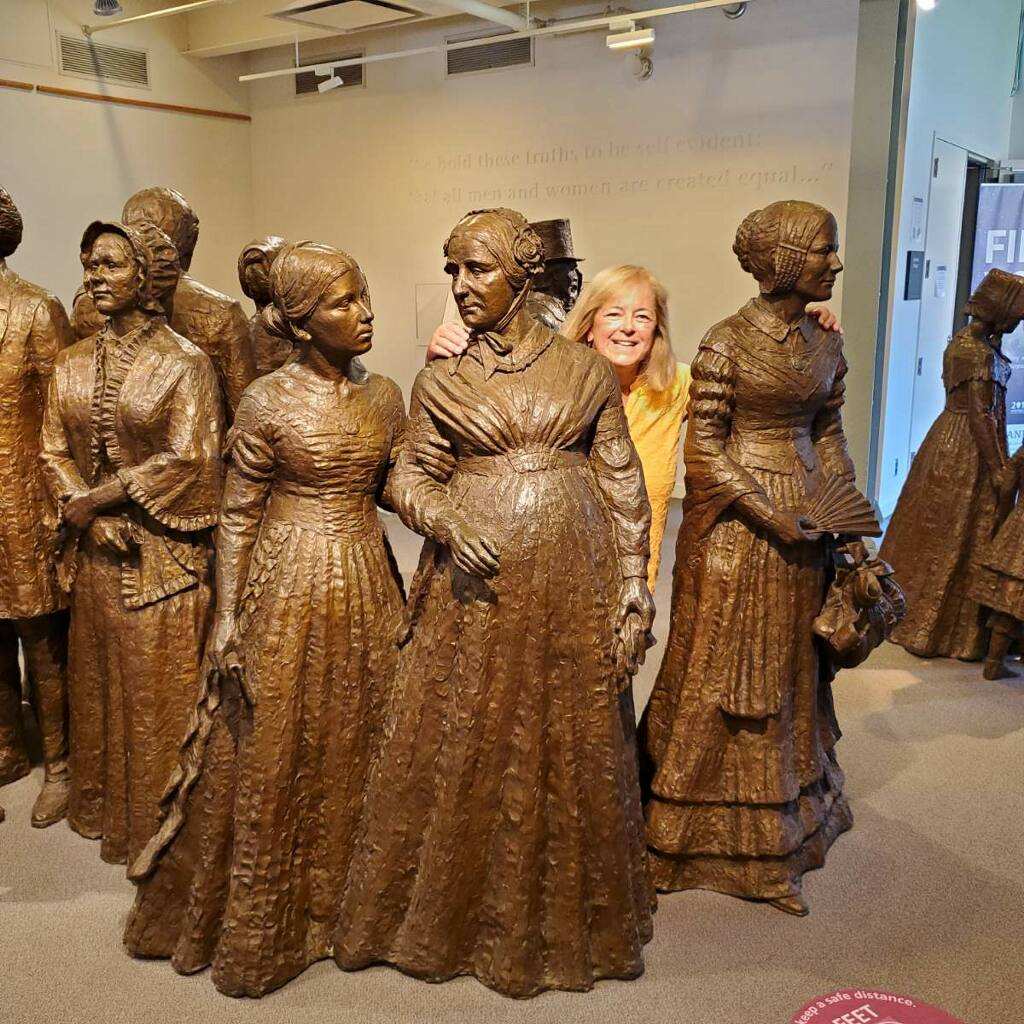