What’s the Story with Fake News? Implications for Journalists

One of the Education Writers Association excellent seminars, facilitated by Jane Elizabeth, Amy Kovac-Ashley, and Katie Kutsko from the American Press Institute, was called “Building Trust in an Era of Fake News”. It’s no secret that American news media has steadily lost credibility with the public and that trust and confidence in the press are at an all-time low. So what’s a journalist to do? Luckily, the women from API had some suggestions for us. 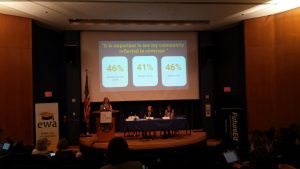 The first was to acknowledge the issue. They asserted that, even though everyone is aware of the problem, the papers aren’t doing much to actively combat it. Their research showed that there are specific things readers want from their newspapers:

Fascinatingly, the researchers learned that 4/10 people surveyed immediately recalled a specific story or piece of reporting that caused their trust in the newspaper to drop.

A high percentage of people placed getting the latest news as one of their priorities.

It’s no secret that readers prefer short and sweet in their news and feature articles these days or that reporters should try to keep their writing to an eighth grade level. "Dig deep but don’t waste time on things that aren’t relevant” they suggested.

Today’s newspapers need to have high-quality websites that are easy to navigate and load quickly. As a side note-most readers strongly dislike ads on the newspaper site. Interestingly, the researchers found that most of the people surveyed didn’t trust news on social media as much and could care less about how many “likes, shares, or followers” a paper had.

To know who is writing the stories

This could be likened to the farm-to-table movement, where readers want to know who is writing the articles they’re reading. The women suggested that providing biographical information, photos, and qualifications for the newspaper’s reporters, along with links to other content they’d wrote, would be viewed as positive by readers. Another “reveal” was that the more education a reporter has, the more evidence (graphs, statistics) some readers will want to convince them to accept the story’s premise.

Following the presentation we broke into small groups to brainstorm ideas to break down some of these barriers between journalists, editors, publishers, and the general public. My favorite was instituting regular conversations with the local readership over coffee or a drink (similar to what many community police forces are doing) where the newsmen and newswomen could answer questions about what the paper’s mission is, the type of stories journalists are looking for, deadlines and any other queries readers might have.

I shared this information with my editor as soon as I got back to Trumansburg. Will keep you posted!