What’s on my Bedside Reading Table this Month?

The one good thing (actually the only good thing) about being sick is that you can lie on the couch and read without feeling like you should be doing something more productive. I’ve been down and out for the last week and have managed to read some of the books in my queue. If you are starting to sniffle-take a look at some of my favorite picks: 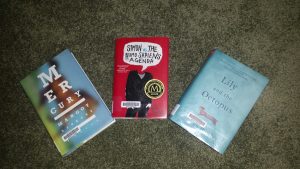 Lily and the Octopus by Steven Rowley

For anyone who has ever had that special relationship with a dog, this is a must-read. The ending may leave you in tears, and the octopus metaphor could take  some getting used to, but the characters will remind you of people you know (without a doubt Ted is one of my best childhood friends) and some of their encounters will leave you laughing out loud. My particular favorite scenes were Lily’s bladder massage and Ted’s sessions with Jenny the therapist!

Though I don’t normally care for dachshunds, Lily is a plucky and intelligent canine heroine and Ted is the kind of glib guy who would be great fun at an ocean-side bar. However, what I liked best about this book is that, like the octopus, it went down deeper. The author found numerous ways to plumb Ted’s seemingly superficial surface and explore the feelings that were buried underneath, reminding readers that what you see may only be the tip of the iceberg. Fittingly, Lily’s final gift to Ted is permission to try to love again-this time with a human.

An excellent psychological drama that kept me up until midnight two nights in a row! What do you get when you combine a clueless ophthalmologist (whose best friend has severely impaired vision), with a wife in the throes of a mid-life crisis who desperately wants to recapture her dream of becoming a professional horseback rider, a horse owner who doesn’t really like her horse, and a few other supporting characters? Readers will soon discover that love, and blindness, can reveal themselves in countless configurations.

A downward spiral ensues, complete with a level of obsession and a moral dilemma that will leave you on the edge of your seat and not quite sure whose side you’re on. Enjoy!

Simon vs. the Homo sapiens Agenda by Becky Albertalli

This YA book made me regret that I’m no longer doing teen book reviews. With each turn of the page readers get an inside look at teen relationships through a combination of compelling, heartbreaking, and uplifting narrative, particularly between those of the same-sex. I also liked that, by the end of the book, everything still wasn’t tied up in a neat little package. Simon hasn’t forgiven the boy who “outed” him yet and he and “Blue”, his first serious boyfriend, have just become a couple (officially on Facebook!). The various dramas and endless complications of being a young person in today’s society are spot-on.

Simon is just so likable, so human, that you can’t help rooting for him. It was also revealing, and occasionally validating, to see how his parents responded to different situations with their three kids, since it hasn’t been that long since I was a parent negotiating with my own sons. I highly recommend that you try to read at least one teen book a month, just to keep current with what’s going on in the world outside your own age bracket!

In the Garden of the Beasts by Erik Larsen

I have been meaning to read this book for several years. I don’t know if anyone else has this problem, but sometimes it takes me a long time to pick up a book when I sense that the subject matter will be heavy and/or depressing. But-needing a break from fiction-I did pick it up and now I can’t put it down.

Since I’m not finished with the book yet, I’ll simply tell you that it’s an excellent piece of narrative nonfiction about the new American ambassador and his family who are sent to Berlin, just as Adolph Hitler begins his ascension to power. Somehow the book manages to strike just the right balance between fascinating and chilling. Even though we already know what the outcome will be, it’s a look back at how easy it is for us humans to deny, minimize, or ignore warning signs until it’s too late.