I thought I was strong enough to do it, but it turned out to be impossible. I just couldn't stay away from the Atlantic Ocean-not even for one summer. So, for the first time in twenty-five years, my husband and I spent four absolutely gorgeous days camping at Nickerson State Park in Brewster on Cape Cod. We quickly discovered that camping by ourselves in the fall was a much different experience than camping with three kids, extended family, and friends. This post is dedicated to all you empty-nesters who may believe that you will never be able to recapture your younger days or that you won’t be able to enjoy certain “family vacation” spots without your children. Trust me-you will! A few tips:

Don’t set the alarm on your phone unless it’s absolutely necessary.

Relaxing in my sleeping bag listening to birds call out while the shadows played across the ceiling of the tent, instead of having to get up immediately to deal with kids or campsite maintenance was one of the small pleasures I allowed myself each morning. It was totally worth it. Who cared if it was nine o’clock before I even made my first cup of coffee on the camp stove?

Don’t do all the same things you did as a family.

We were a very traditional family. Every summer at the Cape we did certain things-the Wellfleet Drive-In Theater, eating seafood at Arnolds and Cooke’s, riding bikes on the Cape Cod Rail Trail, and jumping in the waves at Nauset Beach. Feeling bold, we mixed it up a little. Though we went to Arnolds and Nauset, we also:

We also discovered a few benefits to visiting Cape Cod in September, rather than the July/August trips that the school schedule had confined us to. 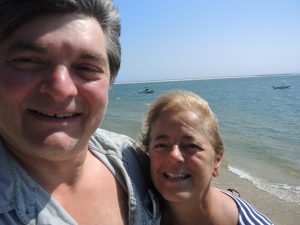 We most likely will return to the family camping trip at some future stage of life. But for now we are having fun rediscovering ourselves as a couple!