With the federal holiday acknowledging Dr. King and the 2017 presidential inauguration falling in the same week, the timing couldn’t be better for this question. Education, voting rights and educational and economic equality were all key tenets of Dr. King’s philosophy. However, prior to his death, many feel he was beginning to shift from using passive resistance to more “push-back” approach so as to keep the momentum of the early sixties moving in a forward direction.

I just returned from listening to four days of talks and conversations between some of today’s top writers and journalists (Thomas Mallon, George Sanders, Teju Coles, and Jane Mayer to name just a few) at the Key West Literary Seminar on “Revealing Power: The Literature of Politics”. The conference sold out in 20 minutes-setting a new record and showing that this is one of the most significant topics for the coming year.

KWLS was held in the San Carlos Institute on Duval Street, founded in the 1800’s. It was intended as a place where Cubans could gather to think, and talk about, their concerns, hopes, and visions for their country, something many Americans find themselves needing now. The panelists and moderators made excellent several points which I think bear repeating and are essential to keep in mind in the coming days, weeks, and months. 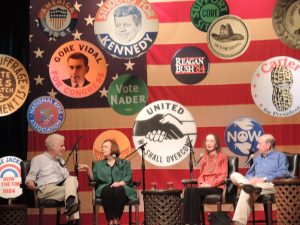 Not all media is created equal

This includes liberal as well as conservative outlets. It’s the reader’s responsibility to evaluate the accuracy of what they are reading or hearing. Before blindly accepting what is being said as gospel truth, take the time to determine whether the person that is conveying the information did their homework (fact checking v. assuming). And speak up! You don’t have to be in communications to write a thoughtful response to a blog post or tweet or to pen a Letter to the Editor. Anyone has a right to disagree or voice their opinion as long as it’s done civilly and respectfully.

We have not yet achieved a “post-racial” society

To the shock and dismay of some seminar attendees, a prominent panelist relayed a recent unpleasant dining experience in Key West where he, his wife, and another couple did not receive the same level of service as the white customers, and in fact were treated quite rudely. People of color around the country (like Michelle Alexander) have been asking all along why, if we are in a post-racial society, significantly more young men of color are still dying or being imprisoned at much higher rates than white males. Inequity continues to be an ongoing problem in the United States.

Journalists and writers must stay strong and vocal

More than ever, writers need to speak up for the principles they believe in. They cannot bow to pressure, threats, intimidation, or popular opinion. Their job is to write article, poetry, and books about timely, relevant, and often tough topics that encourage open discussion.

It is every American’s responsibility to help our country to live up to its promises to all citizens, not just a select few. It is no longer enough to mock, complain, or despair about the position we find ourselves in, both as a single nation and as part of the world we all live in. Nothing is black and white. There is some good in the worst situation and some negative quality in every person. Being open to other views doesn’t mean you have to agree with them, it just means you need to be willing to listen.

It’s time to make some decisions and choices based on what is good for the community, as opposed to what benefits us as individuals. The more specific they are the better. Saying “I’m going to work on alleviating racism” may not get you very far. But saying, “I’m going to read ten books by people from different backgrounds (political, religious, racial) than mine by June and then blog about them or start a book group to discuss them” will.

A commonly heard phrase on Martin Luther King Jr. Day is “A day on, not a day off”. Maybe you weren’t able to attend one of the numerous countrywide commemorations of his life and teachings today. Unfortunately I couldn’t go to my regional celebration because of a dental emergency. But what I can do is resolve to dedicate this coming year to educating myself and my readers through writing about all types of issues and all types of Americans, hopefully respecting our differences, while identifying the universal themes that unite us. For an example of my first attempt at this, check out my January article, “Black History is American History” http://www.rocparent.com/feature/ar17-black-history-is-american-history/

What would Dr. King have thought about the Key West Literary Seminar? We will never know but I like to believe that he would feel that those who participated are committed to carrying on the important work he started.

I welcome your comments!