Room for All? Diversity in Education & the Media: EWA’s National Seminar 2018

As far as I’m concerned, the 71st EWA in Los Angeles was a worthwhile investment of my time and money! Although the theme was a familiar one for 2017/2018, one of the aspects I appreciated most was that sessions weren’t limited to just a single type of diversity. My packed schedule included sessions on diversity in the newsroom, covering LGBTQ+ issues in the classroom, writing about race in education, and free speech on campus. Organizers even strove to include political diversity on the panels! One thing I found especially helpful was that many of the panelists requested that journalists consider reporting on specific topics or angles that hadn’t received as much coverage in the past

Shaun Harper from the University of Southern California gave the opening remarks for the conference, setting the tone for what was to come over the next three days. Harper succinctly listed a number of subjects he felt were not being written about, or being covered inadequately, by those reporting on equity, race, and inclusion in education. Some of the issues he views as most pressing included:

Harper’s brief presentation was followed by a panel discussion “Big Ideas on Equity, Race, and Inclusion in Education”, which set the tone for what we could look forward to over the three-day conference. 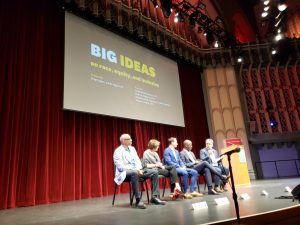