How to Handle Useful vs. Useless Criticism

Hard to believe that the first week of February has come and gone already! I wish I could say the month had started off as an easy, productive one but it didn’t. However, today begins the second week of the month and I’m determined to turn things around before I find myself mired in the mid-winter doldrums. So-let’s talk about criticism.

There are two kinds of feedback that you can receive from others, useful and useless. Though at first glance they might seem similar, they’re actually offered for two very different reasons. Useful criticism is given with the intention of encouraging you to see things from a new or different angle or to help you improve your work. Even when it seems harsh or blunt or hurts your feelings, it also shows you a new path to go down or points out different techniques to try. This type of criticism is especially helpful when you’re feeling stuck as it frequently draws attention to an area of your work that you already knew needed something more to make it even better. Constructive criticism is a necessary evil that we can learn from. Without it, it’s hard to keep evolving as a writer. You don’t always need to like your constructive critics but that doesn’t mean that you can’t gain something from them.

Conversely, destructive criticism is not helpful at all. In fact it can be harmful because it causes us to doubt ourselves and the work we do. The problem with destructive critics is that, though their criticisms are often vague or sometimes even delivered in a friendly manner, they usually contains a “hook” or something you’ve always secretly worried about yourself. Embedded in these types of criticisms is a tiny grain of truth that the destructive critic latches on to and uses to condemn your work across the board. Destructive critics attempt to invoke feelings like shame, uncertainty, and fear. Their goal is to block creativity, or stop it entirely. This is often motivated by jealousy or their own insecurities.

Self-doubt is the biggest hole that a writer can fall into. It’s also a pit that’s’ particularly difficult to climb out of.  You can’t control who decides to critique your work. But you can control whose criticism you choose to respond to and how you decide to react to it.

Let it cool off

Don’t respond in the heat of the moment. We all know the signs of fight and flight that accompany a perceived attack on our written work; a pounding heart, racing thoughts, anger, or tears. Take a deep breath or a long walk instead of instantly firing off an angry email or picking up the phone to give the critic a piece of your mind.

Evaluate the criticism for any useful insights

Determine if there is any valid information in the critique that could help you improve your writing. If there is, put your pride aside and use it!

Get out your “positives” folder

Review the written comments you’ve saved where people have praised your work. This will help you remember that, though there may be people out there who don’t like your writing style, there are lots more who do.

If you find certain words or phrases from the criticism still lingering and festering in your mind try destroying a copy of it in your shredder or burning it in the fireplace. Getting rid of criticism in its physical form can be very cathartic!

Remember that a writer needs to be a rhinoceros

Criticism goes with the turf. Not only will you be critiqued on countless occasions (fairly or unfairly), it’s likely that you’ll also be rejected numerous times throughout your career. If you aren’t writing things that provoke responses from others, you probably aren’t doing your job. Keep your skin thick, your horn sharp, and write on! 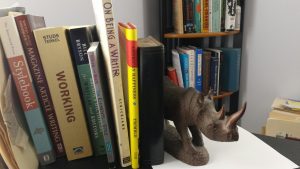