By November 8th, I had the daily routine down. By 7:30 I was up, showered, dressed, and seated in the hotel restaurant. Breakfast was a plate with two eggs, bread, and grapefruit slices. Not a single bite was wasted; I only took what I was certain I would eat. I was able to order my coffee “con no leche” without making the waiters laugh. I was ready for action with my camera, a notebook and two pens, Kleenex, CUC’s (convertible pesos), and bottled water.

The first stop of the day was one I had been looking forward to, since I’ve been writing a farm/agriculture column for Tompkins Weekly newspaper for the last year and a half. Vivero Alamar is a cooperative research urban garden in Havana. The manager, Miguel Salcines, talked about four business principles the farm follows:

Salcines explained that they usually grow about seventeen crops (including lettuce, mint, and corn) which can be harvested every thirty days. Their turnaround time is quick which can be especially important when disaster strikes, like the recent hurricane they are still recovering from. Additionally the farmers at Vivero Alamar are growing about five acres of sugar cane, once a staple of Cuban farms, along with food for the cows and goats who provide the fertilizer for the crops. The farm irrigates with eight community wells and all the fields were well-ordered, with people working industriously in them. 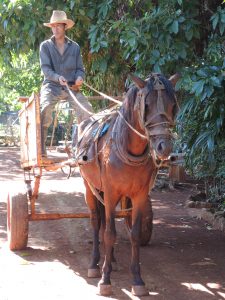 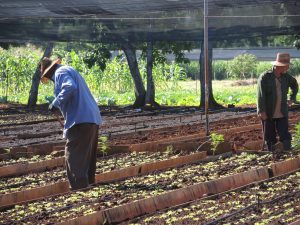 Next the group went to the Museo de Bellas Artes, Cuban Collection where Lucila Fernandez, curator of contemporary art, took us around to see the collections which expanded greatly when Fidel Castro took over, including works from Oscar Cintas and Julio Lobo. This was followed by a lunch of meat, rice, beans, and ice cream, plus local entertainment featuring (yet again!) Beatles songs and the Girl from Ipanema.

The Felix Varela Cultural Center, housed in the San Carlos and San Ambrosio Seminary, was the next stop. I was looking forward to this too as the center is actively sponsoring entrepreneurship programs for Cubans who wish to try to go into business for themselves. The director of the center, Gustavo Andujar, was clearly passionate about, and highly committed to, this mission. A young woman involved in the program spoke of some of the ups and downs associated with learning to run a business in Cuba as well. I would have loved to have stayed here longer as I had lots of questions but, alas, we had to return to the hotel to get ready for our farewell dinner at La Guarida, self-described as the most elegant paladar in Havana. 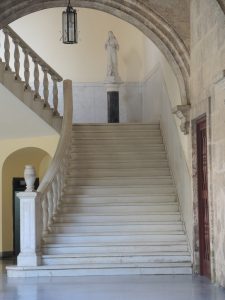 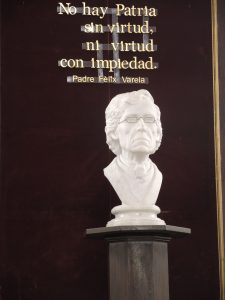 The restaurant was a mix of the real Cuba- its history and daily routines-and luxury Cuba-what the owners and the country aspire to be. As was frequently the case, the restaurant had no elevator but by this time we were all used to steep stairs and bounded up them to the restaurant. We were seated at a long table near an open window with a view and a light breeze. Fantastic ambiance! Our table enjoyed the first really good red wine we’d found, along with delicious, beautifully presented appetizers, my favorite pumpkin soup but also eggplant and mini fish tacos. The main dishes were also excellent and the service impeccable. This was probably one of my favorite meals in Cuba and I was glad to end my trip on such a wonderful note.

The next morning, as we took a final group photo on the steps of the Riviera, it suddenly stopped drizzling and a huge, brightly colored rainbow appeared over the ocean. It was an uncannily metaphorical moment where it was almost impossible not to feel a flicker of hope for a brighter future for both the country and all the Cubans I’d been introduced to. As I boarded the plane for Miami. I had no idea if, or when, I would ever return to this complicated country. But one thing I knew for sure was that I was so thankful I was able to visit in 2017.