Beginnings and Endings: Inspiration from the Grave

I’m going to interrupt my regularly scheduled post from the EWA conference to take a slight detour to Cleveland. My son graduated from college last weekend, a joyous and celebratory occasion for us all. So when he suggested that we take a walk in his favorite cemetery our last day there; I was somewhat taken aback. In the spirit of adventure I acquiesced, and off we went. 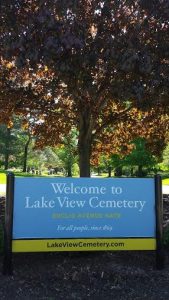 It was an unexpected lesson in history! There were many famous and noteworthy people buried there, like Eliot Ness (who I had always thought was a Chicago native) the famed Prohibition enforcer and leader of the Untouchables. Another recent addition to Lake View was Alan Freed (aka Moondog), a disc jockey who had a huge following among youth. Not only is Freed is credited with coining the term rock ‘n’ roll, he was also the first to stage a rock concert in Cleveland. According to his gravestone he was “colorblind” in the true sense of the word and promoted the music of all races equally. Then there was Garfield’s tomb, with a gilded ceiling that rivals that of many churches and a view of the Cleveland skyline and Rockefeller’s gravesite that can’t be beat. 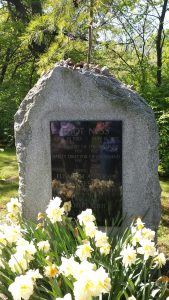 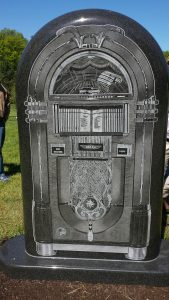 I haven’t been in a cemetery simply to visit for a very long time. I had forgotten how peaceful it feels to just meander among the graves, reading the names and quotes on the various tombstones. Though some may find it a morbid place, I find a cemetery one of the best places to let your imagination run wild. How did the infant twins die? What kind of marriage did the couple buried next to each other have for 54 years? Why did he choose those as his last words, the words he wanted others to remember him by? I wonder why people put small rocks and coins on others graves. Why some choose to have ivy run rampant on their stone while others prefer a manicured and landscaped site.

Cemeteries have a bad reputation as being scary places to avoid at all costs. I disagree (thought you wouldn’t find me in one at midnight on Halloween!) To me they’re welcoming places where you can sit and think about the deeper issues that we rarely make time in our busy lives to ponder. Being in a cemetery is a gentle reminder of your own mortality and an ideal place to consider how you want to live out your remaining years.

What will my last words be? I’m not sure yet. How about you?