April showers may bring May flowers but unfortunately they also brought no blog posts. With my mother entering Hospice and passing away a few days later, it has been a tough month. I’ll write about that experience later. Right now it’s too fresh in my mind. This morning I’m going to blog about something totally unrelated to death and dying, The Alabama Writers Symposium.

Though I wasn’t sure I was up to attending a writer’s conference, it somehow seemed easier to head south than to try to cancel everything that had been in place for several months. Luckily the symposium was low-key, the attendees were friendly, and the talks and readings were wonderful. Not surprisingly, I was the only writer there from Trumansburg, New York! 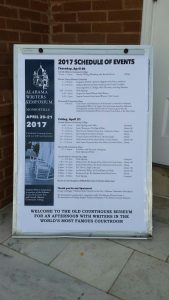 There are a lot of talented writers in Alabama

AWS was held in Monroeville, “The Literary Capital of Alabama”, a town most noted for being the home of Harper Lee and Truman Capote. However, I quickly learned that the state has influenced and produced many more writers, including Mark Childress, Cynthia Tucker, Ralph Ellison, Helen Keller, and Walker Percy-the list goes on and on.

Alabama continues to generate new works by talented writers in all genres and they all have something to say. For example, I was introduced to the poetry of Jacqueline Trimble (American Happiness). Reading her poem “Everybody in America Hate the South” she talked about the “irony of being a black woman defending the South”. Following her poem, “American Happiness”, she voiced her belief that we are “in love with the America we imagine, rather than the America we have” and that this often keeps us from looking at the hard truths about our country. Lots to think about.

This will be a three-year event because there is so much to talk about. The panel featured three historians who eloquently discussed how Alabamians understanding of history has changed over the past fifty years. For example at one time, textbooks had portrayed Reconstruction as a time when malevolent Yankees joined blacks and “bad” whites to create a terrible government that tried to abuse and exploit Alabama by whittling away at state’s rights. Who knew? The authors also emphasized that it’s crucial for citizens to re-engage history, question what they learned, and explore for themselves what really happened.

Another interesting point the historians made was that Alabama is not simply a conservative state (as many northerners believe). It’s a populist state and populism can be found on either the left or the right-wing. That statement definitely challenged one of my beliefs.

On a lighter note, I attended Jaime Primak Sullivan’s reading from her book, The Southern Education of a Jersey Girl, which was also a television reality show, Jersey Belle, about an East Coast transplant to Alabama. A highly amusing and energetic speaker, she observed that there are still people in Alabama that are angry about the outcome of the Civil War. “The whole North/South thing? I never got that. We don’t talk about it. You guys do all the time. But for us it’s not an issue. It doesn’t even exist.” Admitting that for years she dreamed of escaping back to New Jersey, she now considers Alabama her home. “If you don’t love where you’re living and how you’re living now, then when?” she concluded.

**Please note that organizers deliberately chose to leave out the apostrophe in "Writers" in the Alabama Writers Symposium.